Due to their inability to fly, neither bird was able to be released back into the wild. As a result, both have found a permanent home at the Aquarium where CJ and her staff are now working to assess their potential as interpretive animals.

“Interpretive animals join our staff on the Aquarium grounds as ambassadors for their species,” CJ told the Oceanscape Network. “They allow us to educate our visitors about the animal’s natural history and give them the chance to make a connection with a wild animal, something most of us would never be able to do otherwise.”

The process used to familiarize these wild birds with people and allow them to learn basic behaviors is called operant. Through repetition and positive reinforcement (usually the reward of food), Wren and JoJo will learn many husbandry and enrichment behaviors as well as participating in public presentations. Learning to be comfortable in front of large groups can be a long process and not every animal is suitable for becoming an ambassador.

“You don’t usually see brown pelicans as interpretive animals,” CJ said. “We decided to try it with Wren and JoJo because they seem to be temperamentally suited to it. They’re intelligent, personable and fascinating birds.”

When the brown pelicans successfully complete their training and begin public interactions, they will have an interesting story to tell. It wasn’t that long ago that this species was critically endangered in the United States.

Back from the Brink: 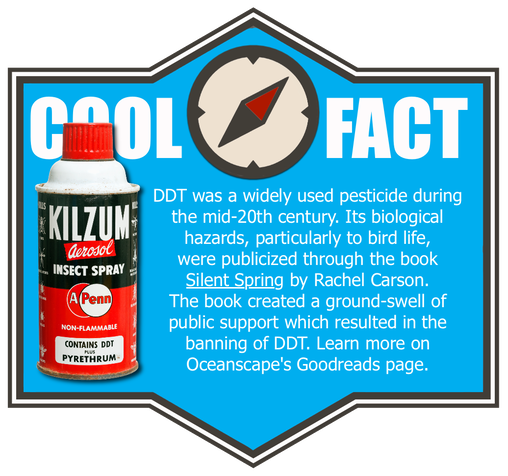 DDT, or dichlorodiphenyltrichloroethane, was a common pesticide used between 1940 and 1972 to help farmers eliminate insects from their crops. Although the chemical was very effective at killing pests, it had unanticipated side effects. As DDT was washed off of farmland by precipitation, it entered the water cycle and eventually found its way into wild animals. The chemical would bioaccumulate in many species of birds, including the brown pelican, causing females to lay eggs with abnormally thin shells. Thin shells meant more eggs cracked before they hatched and caused birth rates to plummet. This phenomenon affected all North American populations of the brown pelican. In some parts of the United States, pelican numbers dropped by as much as 99%. In states like Louisiana, the populations were completely eradicated by 1963. By the late 1960s, on some parts of the west coast, there were only a few hundred breeding pairs of pelicans remaining.

Interestingly, the American public was largely responsible for stopping the use of DDT after a marine biologist named Rachel Carson published Silent Spring in 1962. Carson warned that DDT was degrading avian populations to such an extent that many were likely to disappear for good. Carson’s book created a public uproar and Americans demanded their elected officials take action to outlaw DDT and similar synthetic pesticides.

In 1972, the chemical was officially banned in the United States, but after four decades of widespread use the damage was done. Wildlife officials began devising recovery plans for the affected birds, but they were working against a ticking clock. To aid in the bird’s recovery, federal and local governments established sanctuaries and preserves to aid with successful breeding. Better management of commercial fisheries helped ensure that pelicans had sufficient food sources and would not prematurely abandon their nests due to poor hunting conditions.

These combined efforts were very successful and the brown pelican was removed from the Endangered Species List in 2009. It is still protected under other federal and state laws.

“The success of the pelican’s recovery demonstrates that human beings have the ability to fix our mistakes to benefit the world and the species we share it with,” CJ said. “But this should also remind us to be vigilant about what we’re putting into and taking out of the natural world.”

How You Can Help the Brown Pelican: