EXPERIENCE > YOUTH ACTIVITIES > CONSERVATION PROJECTS
​
For generations, the Pacific lamprey (Lampetra tridentata) were a fixture in Oregon’s lakes, rivers and streams. This fish’s prehistoric ancestors pre-date the dinosaurs with a fossil record that goes back over 400 million years. They’ve changed little in all that time, perfectly adapted to the aquatic habitats of the Pacific Northwest. Today however, you’d be hard pressed to find them in great numbers anywhere in the state.​

The Perils of a "Trash Fish" 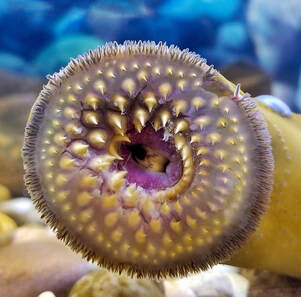 Close-up of a lamprey's mouth
The lamprey lives most of its life as an ammocoete (the larval stage of a lamprey) in fresh water. After its long larval period ends, the fish will metamorphose (the ability of an animal to transform from an immature form to an adult form). During this process, its body and lifestyle will change dramatically. The fish will form a jawless, sucker-like mouth and abandon filter feeding for parasitic feeding in the open ocean, attaching themselves to other fish and whales to suck out bodily fluids.

“They do feed on blood when they are living in the ocean,” said Jessica Powers, Associate Curator of Wildlife at the High Desert Museum in Bend, Oregon. “The feeding on blood is where part of the lamprey’s bad reputation comes from. Those teeth can look a little scary at first glance but they are not harmful at all to humans. And when they come back from the ocean and swim up their natal streams to breed, they do not eat at all, just survive off the fats, lipids and calories stored in their bodies.”
​
Because of their unfortunate reputation as an unwanted or useless species (sometimes referred to as a “trash fish”), little effort has been made to conserve the lamprey compared to other native fish like coho and Chinook salmon which are commercially important. The limited successes so far are thanks largely to the native peoples like the Umatilla and Nez Perce, working in concert with state and federal agencies and non-profits like the High Desert Museum.
“There are two main issues facing the lamprey when it comes to them moving through our rivers and streams,” said Jon Nelson, the museum’s Curator of Wildlife. “The first is getting the adult fish past the dams and other obstacles to their spawning sites. The other issue, which receives less attention, is getting the baby fish back down past those same dams and irrigation diversions.”

The Museum and its partners are trying to mitigate some of these problems. The Confederated Tribes of Umatilla and Warm Springs will collect migrating lamprey at places like the Bonneville Dam on the Columbia River, transporting some of them to the Museum where they are kept in captivity until they are ready to spawn. This process great increases their chances for survival. The fish are also used by the Museum to increase public awareness about the species and the conservation efforts undertaken by the tribes.

More Than Meets the Eye... 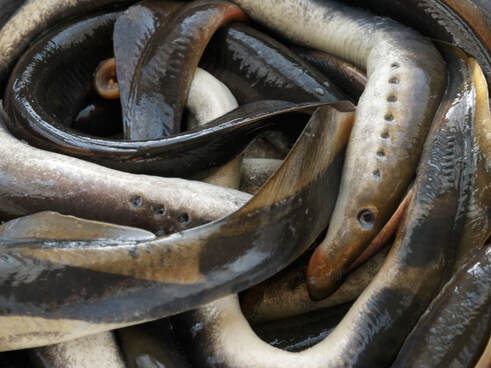 For the native peoples, the lamprey represent not only an important component of the natural ecosystem, but a traditional food source. Before wide scale damming began in the early twentieth century, the tribes fished for lamprey extensively. With the fish now gone from most of its historic range, this food source has been lost.

But things are slowly changing for the better.

In mid-2017, the United States Fish and Wildlife Service issued guidelines to incorporate lamprey passageways into dams and other structures. Similar features, such as fish ladders, have allowed salmonids to migrate more freely. Since they share similar habitats and life cycles, its likely that the lamprey will benefit from these efforts.

“Oregonians just aren’t as familiar with this fish as they should be. My hope for this project is to increase public awareness about the lamprey and lamprey conservation issues,” said Jon. “If we generate more appreciation for the lamprey, hopefully they’ll never end up on the Endangered Species List.