Battle at the Edge of the Sea: 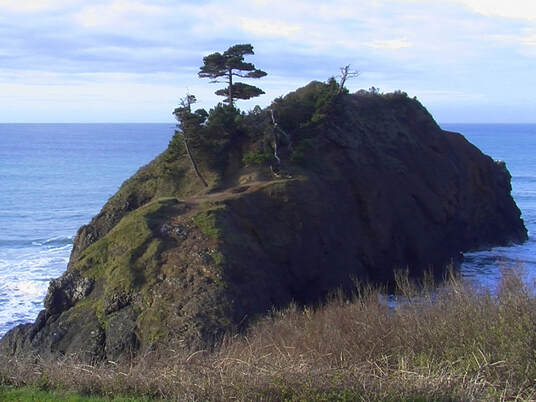 On June 9, 1851, Captain Tichenor and a landing party arrived in Ewing Bay and began to survey the area, all under the watchful eyes of the Qua-to-mah Indians. Captain Tichenor was pleased with the site and soon sailed away for San Francisco to bring back more supplies, leaving behind nine men to prepare for his return.

When it became clear that the trespassers were preparing a permanent settlement, the Qua-to-mah began to harass them. Greatly outnumbered, the settlers quickly moved their provisions onto a rocky promontory connected to the beach by a narrow ridge. This outcrop, which today is known as Battle Rock, formed a natural fortress with steep cliffs and the Pacific Ocean protecting it on three sides.

The men fortified the ridgeline leading up to their makeshift camp with a variety of firearms and even a small cannon, and from that position they were able to repel Indian assaults despite their meager numbers.
​
After the initial bloodshed, an uneasy truce was established but the settlers’ provisions were quickly dwindling. The nine men were faced with a terrible choice: continue to tough it out on the top of the rock until hunger overwhelmed them, or abandon their claim and make a run for it. The men decided on the latter and, under darkness of night, climbed off the rock and made an arduous overland journey to Umpqua City to the north.

By July, Captain Tichenor had returned with a much larger contingent of men and vastly better firepower. But what really sealed Port Orford’s existence was the discovery of gold in the Rogue River Valley the following year. The town’s prosperity was short-lived however, as the gold rush turned to bust within a decade. When Captain Tichenor retired from his naval career, he settled in Port Orford and lived out the rest of his life in the area.

The incident at Battle Rock was the first in a string of conflicts between the Native Americans and white settlers, trappers, prospectors and farmers. The tensions finally culminated in the 1855-56 Rogue River Indian Wars which resulted in all the native peoples being forcibly removed from the area.