EXPERIENCE > YOUTH ACTIVITIES
​
​SCUBA — which stands for “self-contained underwater breathing apparatus” — is one of the best ways to explore marine environments. Unlike other diving techniques which require breathable air to be pumped to the diver from a boat or the land, SCUBA lets you take your air with you and provides greater freedom of movement underwater. The diver is literally immersed in a watery universe, experiencing the weightlessness, the beauty and the challenges it may present.

Diving into the Technology: 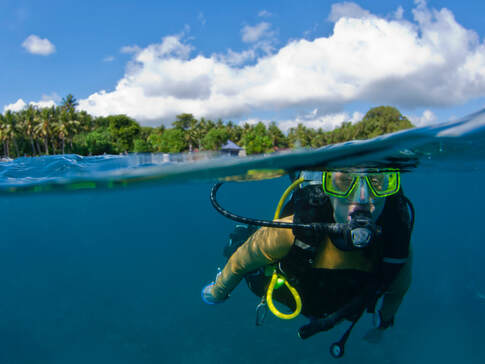 The human dream to swim like a fish is perhaps only surpassed by the dream to fly like a bird. And technology has allowed us to do both – or at least come as close as we can without growing gills or wings.

The first SCUBA equipment – called the Aqua-Lung – was developed in the early 1940s by French engineer Émile Gagnan and explorer Jacques Cousteau. Because this was at the height of World War II, many of the early applications for the Aqua-Lung were geared toward underwater warfare. With the end of the conflict, however, this equipment found new uses for commerce, exploration and recreation. Cousteau may have done more than any other person to popularize SCUBA diving, using the equipment extensively to explore the ocean, uncover ancient shipwrecks and photograph marine life as no one had before.

The design behind SCUBA gear is relatively simple. Cylinders of compressed air are mounted on the diver’s back and fed through a tube to a device called a regulator which is held in the mouth. The regulator controls the intake of fresh air and the expulsion of carbon dioxide when the diver breaths out. Sometimes the expelled carbon dioxide is released into the water as bubbles, but a newer innovation called a “rebreather” actually captures the outgoing air, scrubs it of carbon dioxide, and allows it to be reused. “Rebreathers” can extend the time the diver has underwater and limit the need to wear larger, heavier air cylinders.

Additional gear worn by SCUBA divers will include a protective face mask, swim fins and, if the water is colder or the dive longer, protective clothing called drysuits.

Getting Started with SCUBA:

Because of the complexity of the sport, you can’t just SCUBA dive without advanced training and plenty of experience. In fact, divers must be able to pass both written and hands-on examinations before they can legally practice SCUBA diving. Much of this training is designed to help the diver remain calm in a crisis, acting quickly to something as simple as the regulator falling out of his or her mouth or actually running out of air while submerged. Teens often learn to SCUBA dive, although most experts don’t recommend it for kids younger than twelve due to the physical, mental and emotional requirements of the activity.
​
If you’re interested in SCUBA diving, your best resource may be a visit to the Professional Association of Diving Instructors (PADI) website.

Diving The Oregon Coast: Most divers will tell you that diving along the Oregon Coast is difficult at best. Still, if you want to SCUBA dive our coast there are options.

Diving the Passages: Youth Correspondent Russell Stone discusses his love of SCUBA diving and what happens when curious sturgeon take an interest in you at the Oregon Coast Aquarium.

Tyler's in the Shark Tank! There's no better way to understand underwater environments than to experience them through SCUBA diving. Tyler Ligon, a volunteer diver at the Oregon Coast Aquarium. shares his passion for exploring the ocean – and diving with sharks!

Wreck Diving: What’s it like to diving a sunken ship? Wreck diving is a unique (but often risky) recreational activity.