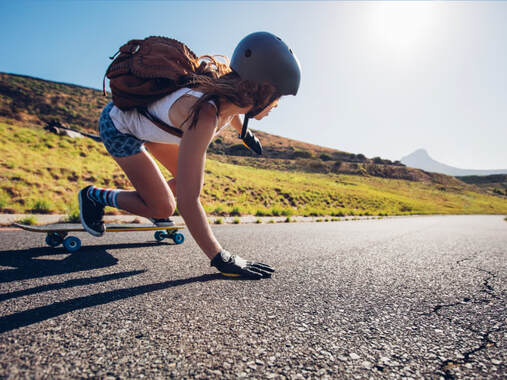 EXPERIENCE > YOUTH ACTIVITIES
​
Depending on who you ask, skateboarding might be described as recreation, a sport, a profession or a lifestyle. People of all ages and backgrounds participate in skateboarding the world over, with an estimated 11 million participating annually.

Despite its current popularity, skateboarding is a relatively new sport. Its origins lie in the United States of the 1940s when kids often created moveable boards and boxes by attaching roller skates to the bottom of them. These were crude, homemade items but their influence lingered. When the surfing craze hit the U.S., especially California, during the 1950s and 60s, many surfers began to experiment with skating as a way to get similar thrills when surf conditions were poor. In fact, many early skateboards resembled miniaturize surfboards with wheels.

By the 1970s, skateboarding was a genuine phenomenon with boards being mass-produced out of polyurethane. It was during this decade and the 1980s that the sport became more competitive and focused on trick skating. Simultaneously, construction of the boards became more sophisticated. Composite materials, including aluminum and fiberglass, helped make the boards more resistant to shattering during use. Eventually, skateboarding became a worldwide industry as well as a pastime, with celebrity skaters like Tony Hawk, Rob Drydek and Tony Alva inspiring thousands to pick up boards.

Beyond the recreational qualities of skateboarding, many participate as professionals or as serious athletes. Reflecting the popularity of the sport, skateboarding will be included in the summer Olympic games for the first time in 2020.

Let’s Skateboard! Join Gordon Boehm and his students at the Bearings Skateboarding Academy in Bend, Oregon, for this look at getting started with skateboarding.