EXPERIENCE > YOUTH ACTIVITIES > CONSERVATION PROJECTS
​
Of the world’s many cetaceans (the class of marine mammals which includes whales, dolphins and porpoises), the vaquita is the most endangered. This animal looks similar to the harbor porpoise (Phocoena phocoena) but is considerably smaller. It was only discovered in the 1950s, but in recent years it has become better known due to its classification as an endangered species.

A Victim of By-Catch 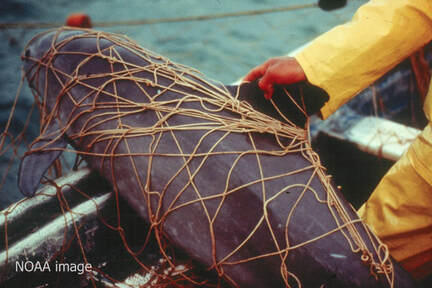 A vaquita killed as by-catch.
The vaquita has never been intentionally hunted by people and there has never been a commercial market for the species. Despite this, the vaquita’s population has been decimated by the fishing industry in the upper Gulf of California. They are accidentally killed in nets intended for other species, a phenomenon known as “by-catch.”

By-catch is not a problem just for the vaquita. Worldwide, thousands of species are impacted by indiscriminate fishing practices or become accidentally ensnared in discarded fishing gear. The World Wildlife Fund estimates that approximately 300,000 cetaceans (whales, dolphins and porpoises) are killed as a result of by-catch every year. Combined with other marine mammals, birds, reptiles and fish, the number of animals killed annually is likely in the milliions.

An especially detrimental relationship exists between the vaquita and a type of fish called totoaba, another endangered species living in the same habitat. A lucrative black market exists for the totoaba’s enormous swim bladder which is used in a traditional Chinese soup. Thus, poaching is common and the totoaba’s population has declined along with the vaquita which are often accidentally caught at the same time. Combined with their already limited population, low birth rate and poor genetic diversity, the porpoise’s numbers have dropped precipitously over the last few decades. As of mid-2016, it was estimated that only 60 vaquita remainded. That number has now been revised downward to 30.

How You Can Help:

Team Vaquita — WhaleTimes, Inc., Oregon Coast Aquarium and Southwest Fisheries Research Center / NOAA Fisheries — will be raising awareness of the critically endangered vaquita and totoaba, reminding everyone to be conscientious consumers by purchasing only sustainably caught seafood, and celebrating all the ways people are helping to save these and other threatened species. All vaquita resources are free and include K-12 curriculum, videos, articles, fact sheets, classroom acivities, conservation guides, interviews with experts and more. New materials will be added throughout the year so watch this page for updates or subscribe to the Oceanscape Network’s free email newsletter by clicking here.

Summer 2017 Update: Learn about the latest rescue efforts in the Gulf of California.

December 2017 Update: As 2017 comes to a close, we conclude our Year of the Vaquita with new curriculum, classroom resources and the launch of our video news magazine, Oceanscape Explorer.