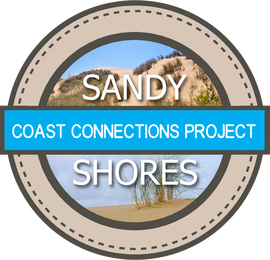 ECOSYSTEMS > OREGON COAST
​
Every year, from roughly March to September, western snowy plovers nest along the Pacific Coast of North America. Historically they have used the sandy areas of beaches, bays, estuaries, and riparian areas to scratch out shallow nests and lay on average three speckled eggs. In the Oregon Dunes National Recreation Area, these tiny birds nest exclusively in the dry sand areas around the foredunes where it’s not uncommon to stumble upon one of many signs cautioning visitors about their presence.

​Once widely distributed from Washington to Baja California, only about 2,000 individuals still survive in these areas, the unintentional victims of efforts to improve the coastline for human habitation.

The swath of coastal dunes which starts on Oregon’s Central Coast and spreads south for over 50 miles (80.5 km) is an oddity. It was formed by the unique geographical Replacement of rivers cutting across layers of sandstone, and then carrying the sediment toward the Pacific Ocean where wave action and strong winds crush it into fine grains and push it back toward land. This process has been going on, uninterrupted, for approximately 6,000 years, building some of the drifts as high as 500 feet (152 m) and pushing the sands inland as far as three miles (4.8 km). This makes the coastal dunes of Oregon are the most expansive in North America.

It took thousands of years for the dunes to form, but it’s only taken a century for much of them to sink beneath the waters of an expanding wetland. As invasive plants such as European and American beach grass stabilized the dunes, it has created an unusually tall foredune (the dune closes to the sea) which caused the sand in the deflation plain behind it to be blown away by the wind. As the interior sand vanished, the landscape descended until it reached the water table below. During the winter months when precipitation is much higher, the water table can rise substantially, transforming the plain into a sprawling wetland.

Although this unintentional transformation has provided new habitat for animals, especially birds, it is also rapidly destroying a very unique ecosystem with the wetlands expanding further eastward each year.

Hiking the John Dellenback Dunes Trail: You're invited to hike this picturesque trail which snakes through a variety of coastal ecosystems including a conifer forest, riparian areas and a dune sea.

Formation and Destruction of a Dune Sea: It's taken tens of thousands of years for Oregon amazing coastal dunes to form, but the recent introduction of a few plants has dramatically changed this ancient landscape in just a few decades.

The Western Snowy Plover: An Oregon Success Story: This tiny shore bird is a big success in the history of wildlife conservation in Oregon. This is the story of the western snowy plover.

Where Can I See Dunes On the Oregon Coast?

Representative Species of the Oregon Dunes:

​Suggested Activities for the Oregon Dunes: