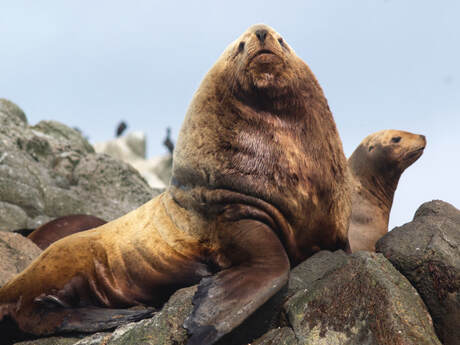 EXPERIENCE > YOUTH ACTIVITIES > CONSERVATION PROJECTS
​Imagine a marine mammal about the size and length of a Volkswagen Beetle and weighing up to 2.5 tons (1,120 kg). It may be hard to visualize how such a physically impressive species could be vulnerable to anything, but for the Steller sea lion, the fourth largest pinniped in the world, the future was once very bleak.

There are two major populations of Steller sea lion in the Pacific Ocean. The western population lives along the coasts of Russia and Japan to central Alaska, while the eastern is located from southeast Alaska to California. Between 1976 and 1990, sea lion numbers plummeted by as much as 75% and the animal was placed on the federal Endangered Species List (ESL). Although historically hunted for both their meat and fur, the population decline in the twentieth century was related more to ecosystem-wide changes in prey distribution and abundance.
​
Once the species was given extra legal protection under the ESL, it was up to government agencies to help monitor their recovery. Enter Bryan Wright, a biometrician for the Oregon Department of Fish and Wildlife’s Marine Mammals Program (ODFW).

A biometrician provides statistical analysis of data collected about plants and animals — an important skill for agencies like ODFW which monitor population sizes of many animals and plants. When it comes to threatened and endangered species, knowing if numbers are increasing or decreasing becomes even more vital. But it’s not easy work.

“The basic tool we have for monitoring abundance [of sea lions] are aerial photographic surveys,” Bryan told the Oceanscape Network from his office in Corvallis. “Because they occur through the whole coast, we have to use a plane to cover all that territory.”

The Oregon State Police Department assists Bryan in these surveys by providing the aircraft and pilot. As the plane flies the 300+ mile length of Oregon Coast, it will circle above known haul-out areas while Bryan snaps photos of the animals using a high-definition digital camera.
In years past, ODFW had the laborious and time-consuming task of counting each animal from slides projected on a wall. Today Bryan’s assisted by Geographic Information System (GIS) software and custom computer programs he designed for ODFW. Because each animal is assigned a location coordinate, the computer can “remember” which animals have already been counted and automatically tally the total across the entire survey. Using computer technology in this way has reduced the time it takes Bryan to analyze the surveys from weeks to days.

“A plant or animal being removed from the Endangered Species List is a pretty rare occurrence,” said Bryan. “But our counts, combined with those from other states, showed that the numbers of Steller Sea Lions was actually increasing and that helped get them removed from the list in 2013.”

Although delisting was a positive step, the Steller Sea Lion continues to be monitored because it is still vulnerable to a variety of hazards.

“Climate change is a big potential threat in the future,” said Bryan. “No one really knows how that might affect their food resources or their distribution. But right now they’re doing good, they’re still increasing.”
​
Steller sea lions can be found year-round on the Oregon Coast, with particularly large haul-out areas being at the Sea Lion Caves and the Simpson’s Reef at Cape Arago.