Discovery of the Sea Lion Cave: 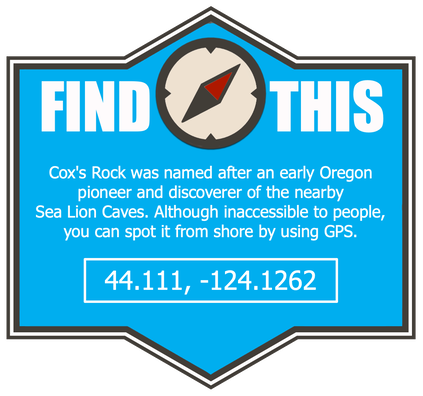 It was a gentle day on the Oregon coast in 1880. The winds were calm and the waves did not surge quite as violently against the rocks as was typical. Captain William Cox decided to take advantage of the favorable weather to explore a strange grotto located at the bottom of a towering precipice. In a small boat, he maneuvered his way through a 1000-foot (305 m) long cleft in the rock and found himself inside an immense sea cave. All around him, hundreds of Steller sea lions began to bark angrily, issuing both a warning to their young and a challenge to the trespasser.

Early Spanish explorers had called the Steller sea lions “lobos marinos,” which means “sea wolves.” This might’ve been due to their dog-like cries or perhaps their habit of living in packs. Whatever the reason, Captain Cox had to feel nervous being surrounded by so many “sea wolves” at once.

Captain Cox was the first non-Native American to enter what would later become known as the Sea Lion Caves… and he immediately recognized their value both to the local sealife and to him personally. After making multiple visits to the cave, Captain Cox purchased it outright in 1887. Years after Captain Cox’s death, his family sold the cave to a businessman who began to develop it into a tourist attraction. At this same time, the long-anticipated Oregon Coast Highway 101 was being constructed and promised a new era of sightseeing and pleasure travel along the coast. The Sea Lion Caves promised to be a favorite destination.

​Although Captain Cox never saw the development of the cave into an educational center, his presence still lingers in the area. Just to the south of the Sea Lion Caves is an island known as “Cox’s Rock.

​For more about the Sea Lion Caves, visit their website.