ECOSYSTEMS > OPEN SEA > TWILIGHT ZONE
​
​In Summer 2013, a major cable network created an international sensation when it broadcast a special claiming a prehistoric shark called a megalodon still existed in the waters off of southern Africa. While the network’s “documentary” was fictional, science does occasionally find species previously thought extinct. (For more on this topic, see Megalodon Myths... and a Few Facts, Too.)

The coelacanth (pronounced SEE-lah-kanth) is probably one of the best examples of this.

Because no coelacanth specimens have been found in the world fossil record prior to 70 million years ago, paleontologists were certain the fish was long since extinct. Then a living coelacanth was pulled up in a fishing net in the western Indian Ocean in 1938 and the scientific community erupted with excitement. Almost immediately the coelacanth was proclaimed a “missing link” and a “living fossil.”
​
But did this fish really survive unchanged by evolution for millions of years, even as the oceans changed dramatically and other species disappeared entirely? As it turns out, the coelacanth's story isn’t quite that simple.

What's So Special About the Coelacanth? 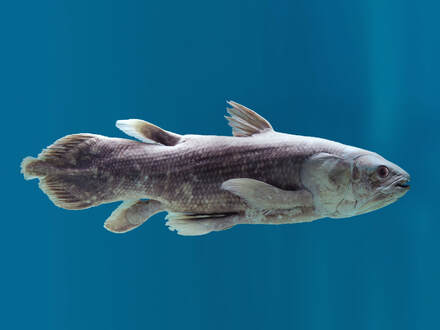 Coelacanth (Latimeria chalumnae)
The excitement over the coelacanth discovery was understandable. The fish is completely unique among living species when it comes to its physiology. For example, it has a special electrosensory organ in its snout and a hinged mechanism in the skull which allows it to sense prey and then expand the width of its mouth when consuming it. A cartilaginous rod called a notochord serves as a primitive backbone and helps support the body. Aside from gills, the fish also has the beginnings of air-breathing lungs, and fins with fleshy lobes which scientists believe are the rudimentary beginnings of legs. Paleontologists theorize that prehistoric fish used similar lobes to pull themselves onto land, an adaptation which ultimately resulted in all tetrapods, a group of four-limbed animals which includes humans. SCUBA divers who swim with coelacanths have described how they use their lobed fins like they’re “walking through the water.”

​Many of these features were also observed in the fossilized remains of prehistoric coelacanths, which helped reinforce the belief that the fish had survived unchanged in the ocean for tens of millions of years.

Are Coelacanths Really "Refugees from Time?"

Like all organisms on Earth, the coelacanth was not excluded to evolutionary change as the modern species are completely different on a genetic level from those who prowled the prehistoric seas. What’s more, the two known modern forms of coelacanth are also genetically distinct.
​
So if the modern and extinct coelacanths are different species, why do they look alike? Scientists believe the fish’s body structure hasn’t changed much because it didn’t need to. Although odd looking when compared to other fish, its physiology has served its purpose well as an apex predator. In this respect, coelacanths are similar to sharks, another marine species whose physical appearance hasn’t changed dramatically over millions of years or between different species.

Coelacanths In A Changing Ocean 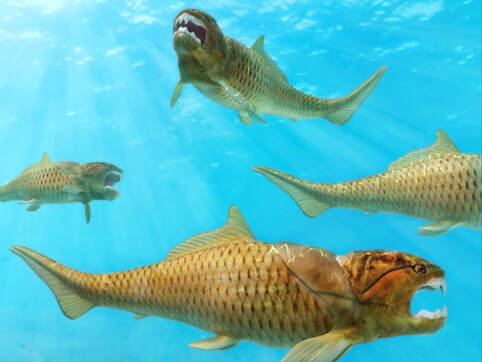 Dunkleosteus
When coelacanths first appeared during the Devonian Era, or approximately 408 million years ago, sea levels were much higher and the worldwide climate much warmer. Great reefs covered the ocean bottom, some extending for hundreds of miles, providing food and shelter to a tremendous variety of animals. Fish flourished under these beneficial conditions and ray-finned, lobe-finned and armored species appeared during this era. Some of these fish species migrated onto land and evolved into tetrapods.

The ancient coelacanth was a widely dispersed species as its fossils have been found on every continent except Antarctica. It probably used its lobed fins to “walk” along the marine reefs searching for prey. Around it, alien-looking invertebrates fluttered by on the currents or buried themselves in the sand. In the sunlit waters overhead, primitive sharks called cladoselache pursued various ray-finned fish like cheirolepis. Occasionally, the largest predator in the Devonian sea — the dunkleosteus — might swim past. These massive fish grew over 30 feet (9 m) in length and had snapping jaws which could slice through the thick shells and armor of other marine animals.

The modern coelacanth's home is in the ocean’s twilight zone, a much darker and colder environment than that of their prehistoric ancestors. Populations are found in both the Indian Ocean near the east coast of Africa (Latimeria chalumnae) and in the waters of Indonesia (Latimeria menadoensis). The fish tend to congregate in groups, often in sea caves or beneath ledges, venturing out into the open water only after dark. Opportunistic feeders, coelacanths have been known to consume everything from sharks to cuttlefish. Depending on their location, other species sharing the coelacanth habitat may include tiger sharks, spinner dolphins and green sea turtles.

It’s unknown exactly how many coelacanths currently exist in these isolated areas, but scientists do not believe there are more than one thousand individuals. As such, they are considered an endangered species.