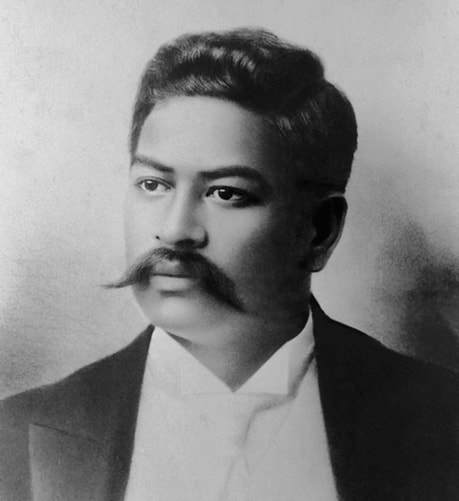 ne of the first printed stories about surfing on the U.S. mainland came from the July 20, 1885, edition of The Santa Cruz Surf newspaper. The surfers were three young brothers of royal descent from Kauai, part of the Hawaiian Islands chain. The oldest, Jonah Kuhio Kalaniana’ole (pictured right), was only fourteen at the time he went “surfboard swimming” at the mouth of the San Lorenzo River in the Monterey Bay.

Apparently Jonah and his siblings created quite a spectacle as local residents stopped to watch wide-eyed. Nothing like it had been seen before, as this was long before California was famous for the sport.

Surfing was called the “sport of kings” by the Hawaiians, and strangely enough Jonah would soon know what it was to be a king… or at least a prince. Several years after he surfed the San Lorenzo, he was adopted by the last sovereign monarch of Hawaii, Queen Lili’uokalani. He spent a year in prison after leading an unsuccessful uprising against the forces who overthrew the queen. After his release, he was elected to the United States Congress as the representative for Hawaii, a post he held for ten consecutive terms. During this long life, Jonah greatly improved the living conditions for his fellow Hawaiians. He would become affectionately known as Ali’i Makaainana (“The Prince of the People.”)

Hawaiians still celebrate Prince Kuhio Day every March 26 and his name and likeness can be found all over the islands.