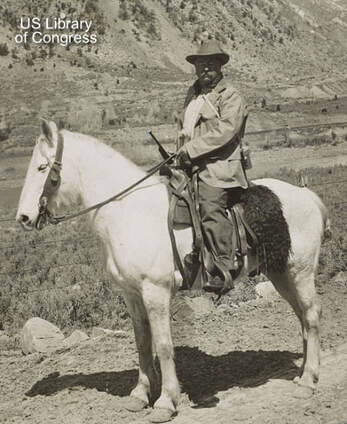 Theodore Roosevelt exploring the wilds of Colorado.
For Americans, the idea of heading outside, living off the land (at least partially) and investigating the country’s vast wild places was greatly influenced by our 26th president, Theodore Roosevelt. As a child, Roosevelt was asthmatic but determined not to let his physical condition hobble him. He was a zealous advocate for physical activity and self-improvement. He studied natural history extensively and was fascinated by nature. As he grew older, these boyhood interests coalesced into a passion for conserving our country’s natural areas.

In fact, during a 1908 White House speech on conservation, Roosevelt voiced some concerns which we still struggle with over a hundred years later:

“We have become great because of the lavish use of our resources. But the time has come to inquire seriously what will happen when our forests are gone, when the coal, the iron, the oil, and the gas are exhausted, when the soils have still further impoverished and washed into the streams, polluting the rivers, denuding the fields and obstructing navigation."
​
Roosevelt was a popular president, so many Americans began to emulate not only his passion for the outdoors, but also his persona as a robust outdoorsman. His frequent camping excursions and exploration of America’s vast wilderness were followed closely by the popular press, fueling excitement among the population for these natural wonders. During his years in office, Roosevelt supported the establishment of numerous national parks (including Oregon’s Crater Lake National Park) and enacted legislation to protect the country’s natural and cultural heritage. Thanks partly to Roosevelt’s passion for nature, Americans today have the chance to camp, hike, swim, canoe and explore these magnificent areas.

When human being were more migratory, living outdoors was just how you survived. As we created urban centers and became more settled, the concept of outdoor living became unique. Over the years, various forms of camping as a recreation have emerged.

Tent Camping: Probably the form of camping most people think of or have experienced, tent camping became largely recreational at the beginning of the twentieth century and was often considered a family activity. Modern tents and gear, combined with the abundance of public campsites, means camping can be a simple weekend getaway or a more elaborate vacation. If you don’t have your own tent, many outdoor stores will rent them or you can reserve time at campgrounds with ready-made tents such as yurts, tent cabins or even tepees.

Backpacking: Combining elements of both hiking and tent camping, backpacking requires the participant to carry all their provisions with them as they are usually moving through remote natural areas and must be self-sufficient. Of all the camping forms, backpacking is one of the most popular among Americans, and has resulted in an entire industry for the creation of lightweight gear and supplies suited for this activity.

Bicycle Touring: In this form of camping, gear and supplies are carried on a bicycle. This recreational form of camping may allow the participant to travel greater distances than on foot, but also limits the areas which can be visited. Although off-road bicycle touring does exist, its more popular form is along rural backroads, through national parks or as part of a large organized event.

Canoe or Kayak Camping: Imagine bicycling touring… but on the water. Canoe and kayak camping have a similar premise where the camper uses a human-powered vehicle to get from place to place. The camper takes along supplies and camps out on beaches or in riparian areas between legs of the journey. Kayak camping in particular is very popular in Oregon due to both the coast and the large number of rivers.

Motorhoming: Some outdoor enthusiasts wouldn’t consider motorhoming to be a legitimate form of camping as using a recreational vehicle negates the back-to-basics premise of most campers. In fact, some motorhomes can be as expensive and elaborate as a house, offering everything from waterbeds to satellite television. Other vehicles, such as tent campers, may be less luxurious.

Survivalist camping: Taken to the furthest extreme, the survivalist camper may enter the wilderness with little more than a knife, a small amount of food and water, and the clothes on his or her back. Here, the challenge is not just to “rough it” outdoors, but to actually procure or produce everything you’ll need to survive the experience. This might include catching or collecting your own food, finding drinkable water and building a shelter. Needless to say, survival camping requires a tremendous amount of education and training before it should ever be attempted.