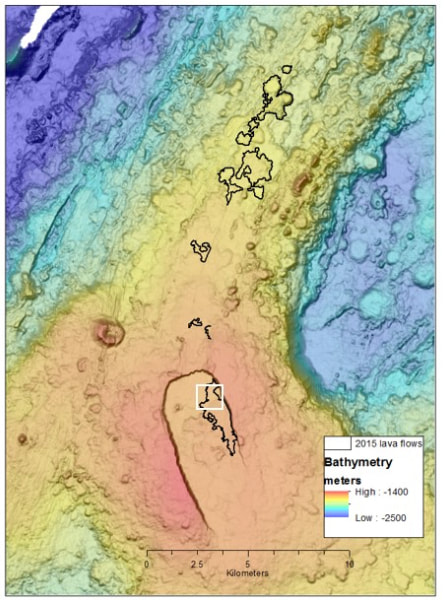 The high resolution multibeam sonar data collected by AUV Sentry allows fine details of new lavas to be resolved in the resulting maps. While ROV Jason can photograph similar features, it cannot access the extensive areas that AUVs can map, so often the AUV maps are used to identify features that merit detailed exploration with ROV Jason. The combination of widespread, high resolution mapping is a critical contribution to the characterization of the distribution of the 2015 lava flows, yet another important step towards understanding this active submarine volcano.

In addition to creating high-resolution bathymetric maps, another goal of the sonar mapping by AUV Sentry is to look for changes in seafloor depth due to deformation related to inflation and deflation since previous surveys were collected. This data will be used to complement the pressure measurements and expand the spatial coverage of the deformation measurements in the future.

Images courtesy of the 2015 Axial Team.