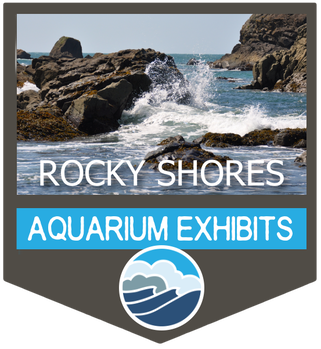 ECOSYSTEMS > OREGON COAST
​
For over 40% of its 300+ mile length, the Oregon Coast is a dramatic wall of dark volcanic stone pressed up against the Pacific Ocean. These areas are what is generally known as the rocky shores, although they may include additional ecosystems such as intertidal areas, cliffs, headlands and tide pools. Offshore, 1,400 rocks, sea stacks and islands mark where the coast used to be before it was persistently eroded by the ocean waves.

The variations in Oregon's rocky shores are the result of its underlying geology. For example, the North Coast is comprised mostly of hard volcanic basalt, a dark stone which is more resistant to the wave action and wind erosion. Here, the rocky shores are defined by massive cliffs and headlands which provide nesting areas for a variety of seabirds. However, the South Coast is composed largely of sedimentary and metamorphic rock which is less resistant to erosion. Here, the lofty cliffs give way to coastal dunes, wide sandy beaches and rocky nearshore reefs. Because the rocky coast is more fragile here, there is a greater number of islands and offshore rocks, all of which were once part of the mainland. The Central Coast is an amalgam of both types. Areas like Cape Perpetua boasts the dark volcanic cliffs, but may be interrupted by sandy beaches, wide bays and river mouths.

An App for That: A new smart device app from the US Fish and Wildlife Service gives flight to bird conservation efforts at Yaquina Head. Oceanscape Network Youth Correspondents Macy Dexter and Arii Gaempa check it out.

​Headlands: A headland is a point of high land which juts into a body of water such as a lake or ocean. Although certainly not unique to Oregon, they are a common feature due to the distinct geology of the state's coastline.

​Uplands: Uplands are elevated geographical areas which include any headlands, hills, terraces or low mountains.