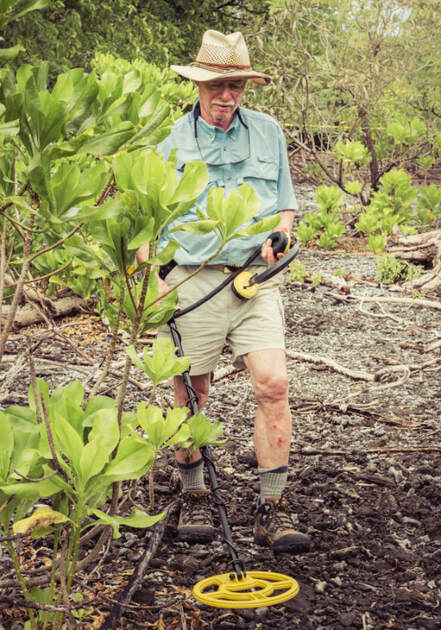 Ric Gillespie with metal detector.
The 2015 expedition began with intense excitement. Three years earlier, a subcontractor had performed a side-scan sonar of the Nikumaroro coral reef near where TIGHAR believes Earhart’s plane had crashed. Those scans revealed something odd beneath the surface. This “anomaly” was an object approximately the same size and shape of Earhart’s famous Lockheed Electra airplane. The primary focus of the most current expedition would be to investigate the “anomaly” up close.

“We wanted to use the three person manned submersibles of the Hawaii Undersea Research Labs,” Ric told the Oceanscape Network in a phone interview in March 2016. “They’re by far the best way to search a coral reef slope like that, but we just couldn’t raise the money.”

Instead of abandoning the expedition, TIGHAR decided to use a remotely-operated vehicle (ROV) to investigate the anomaly. Under normal circumstances, two ROVs would be present on this kind of operation, but lack of funding meant only one was taken and it malfunctioned almost immediately.

“There was just a cascade, a sequential array of mechanical problems, each one leading to the next,” Ric said. “After struggling with this device for days and never getting it to work properly, we finally had to give up and improvise.”

In a last ditch effort to gather useful data, the team’s technicians removed the ROV’s camera and lowered it down on a rope over the anomaly. Programmed to snap photos every 5 seconds, TIGHAR was able to obtain hundreds of underwater images but not one contained any clue as to the anomaly’s identity.

The team was still baffled by the anomaly when they returned to the United States, so a TIGHAR member with expertise in side-sonar analysis ran the original scans through previously unavailable software and discovered that there was more data than originally thought.

“What the new data showed is that there were all kinds of objects on that reef slope that we hadn’t known about, many of them being the approximate size and shape of our anomaly,” Ric said. “In other words, our anomaly wasn’t really an anomaly.”

So what was it? Most likely a coral ridge, Ric stated.

“So in the end, we did answer our biggest question — is the anomaly actually something worth investigating? — but that answer was ‘no.’ And of course, you’d ideally like answers other than ‘no’ but that’s part of the deal. That’s the nature of science. Sometimes you get answers, sometimes you just get more questions,” said Ric. “What this expedition really taught us is that we need better tools… Less than 5% of the search area was ever covered by ROVs, so to do this right we need manned submersibles.”

Despite the disappointment over the 2015 expedition, Ric is undeterred.

Next Steps on Nikumaroro:

One thing which may help TIGHAR with its quest is the current protected status of Nikumaroro and the  Phoenix Island chain. As part of the world’s largest marine reserve, the scientific community is anxious to undersea map all of the islands and atolls in the area and its possible the search for Earhart could piggyback on these efforts.

“Those reefs out there are a tremendous sources of information about the effects of climate change, El Ninos and other phenomena,” Ric said. “If this large scale survey of the  Phoenix Island chain happens in the near future, TIGHAR could try to stage our survey at the same time when all the equipment we need is already in the area.”

Another promising path TIGHAR is exploring is the use of specially trained dogs to identify the possible remains of Earhart and Noonan. In 1940, British settlers on the island recovered a human skeleton in the area known as the “castaway campsite.”

Although the remains they collected vanished during the intervening years, teeth and bone fragments may still exist on the island. TIGHAR archaeologist Dawn Johnson wanted to test this hypothesis further by using “forensic dogs” who can detect smells associated with human bodies even after decades of decay and beneath many feet of earth and debris. These animals have been very successful at recovering the remains of soldiers lost as far back as World War II.

During the expedition, Dr. Johnson gathered earth samples from known village gravesites; from control sites where no graves were known to exist; and from the “castaway campsite.” When she returned to the United States, these samples were set up in a large auditorium and the forensic dogs — amazingly — alerted on both the known gravesite and the “castaway campsite” samples.

Ric cautions that this evidence doesn’t mean that Earhart died in the “castaway campsite,” but it does give the archaeologist a much smaller area to search for human remains on future expeditions.

“Science is often about two steps forward, one step back,” Ric said. “The question is, is there anything still there [on Nikumaroro] that’s findable? And that’s what we’re trying to do. Trying to find something that finally wraps it up.”

For more information about TIGHAR’s Earhart Project, visit their website by clicking here. Additional updates on this virtual exploration will be posted on the Oceanscape Network as they become available.