Bring Back the Bay: 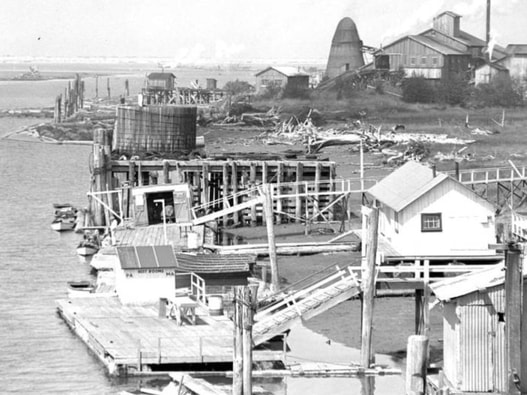 Old Kernville as it appeared in the early 20th century. (Photo: Oregon Historical Society.)
Today, Siletz Bay is a rich estuarine environment, a haven for birds, marine life, nature enthusiasts and sportsmen. It didn’t used to be this way. At the point where the Siletz River meets the bay sits the small town of Kernville. The older part of this community, now referred to as “Old Kernville,” was one of the first Euro-American settlements in the area. Established in 1896, most of the residents made their living fishing for salmon or working in the local cannery. When the salmon population dwindled due to over-harvesting, the cannery closed down and was replaced with lumber mills. Dikes were built upstream to dry up the estuary and transform it into grazing land for cattle. The marsh quickly became a stagnant, polluted wasteland. Fish which used the area as a nursery disappeared, followed by those species who relied on them for food.

By the early 1990s, Kernville was a virtual ghost town, but the dikes and pollutants left over from decades before were still poisoning the estuary. Then several organizations, headed by the U.S. Fish and Wildlife Service, began to actively restore the area. Thousands of feet of dikes had to be removed in order to reestablish the natural mixture of fresh and salt water to the area. Hundreds of trees that had choked the estuary were subsequently killed by the brackish water. Their broken gray trunks are still scattered across the wetland today.

The good new is many animals returned to the damaged paradise. Hikers, photographers and kayakers now enjoy seeing North American river otter and American beaver swimming upstream.  Black-tailed deer and Roosevelt elk browse in the forest beyond, but are quick to vanish when they see humans approaching. In the wetlands, songbirds and seabirds build their nests and hunt the fish and other marine creatures dwelling in the murky water. It’ll take decades more before the Siletz Bay estuary returns to its natural, healthy state… but this is a good start